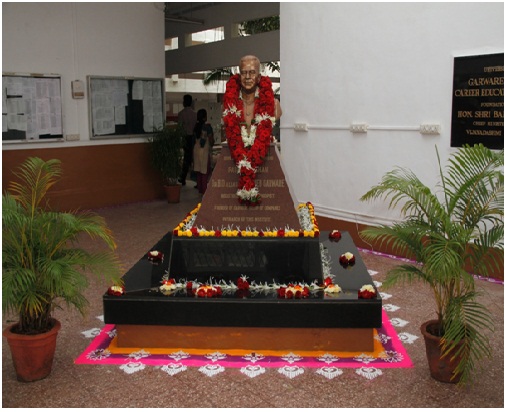 The House of Garware’s was founded by the dynamic visionary, Late Padmabhushan Balchandra Digamber alias Abasaheb Garware. The GICED is his brain-child as much as that of the University, signifying the joint venture of education and industry.

Shri Abasaheb advocated the re-orientation of education, because in his view traditional arts, crafts and hereditary skills that passed from one generation to another were disappearing and there were no facilities for formal training in these areas. Further, trained manpower in various skills and trades migrated from India to other countries causing an acute shortage of skills at home.

Industry then which was poised for rapid growth, did not have properly trained personnel for manning the shop-floor operations. Curiously, little training within the industry was imparted, except in the highly organized sector. This training gap was discussed by Shri Abasaheb with eminent industrialists in Mumbai. The idea of such an Institute for career / vocational education, envisaging coordination of industry and university activities, found spontaneous acclaim.

It was in 1981 during the University of Mumbai’s post-centennial silver jubilee celebrations that the Vice-Chancellor, Prof. Ram Joshi, approached the House of Garware for financial support to new educational ventures. The University and the Garware Foundation examined several proposals and proposed the establishment of an Institute wholly devoted to the promotion of career education. Affirming its interest the Garware Foundation signed an agreement with the University for support in establishing such an Institute. That gave birth to GICED as an unique institute of University bringing industry-education venture for a major diversification programme in higher education. Thus, the Institute was founded on Saturday, 27th October, 1984 and inaugurated by Hon. Shri. Y.V. Chandrachud, Chief Justice of India. The regular diploma courses started in August 1985.